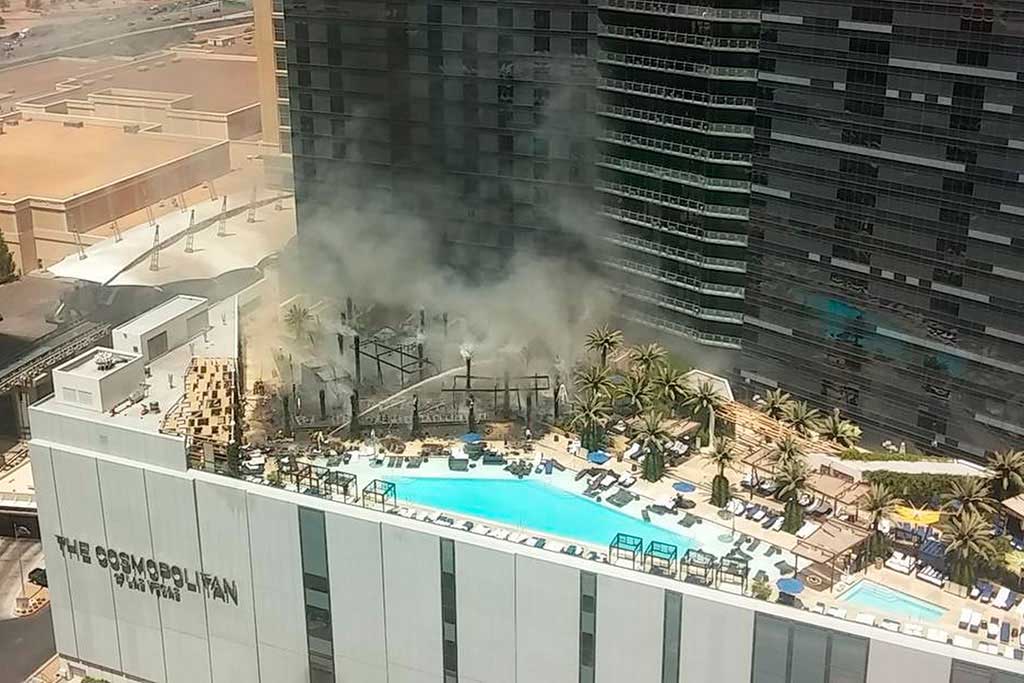 After the fire, the decorative palm trees and cabanas at the Bamboo Pool were a total loss, while SYNLawn synthetic turf simply turned black and melted without flaming up or contributing to the fire.

LAS VEGAS, NV (PRWEB) OCTOBER 06, 2015: The fire on the 14th floor Bamboo Pool area of The Cosmopolitan Hotel on July 25th, according to news reports, took only minutes to spread due to high winds and ample fuel from the decorative polyethylene encapsulated foam palm trees and cloth covered cabanas.

And while there were only two reported cases of smoke inhalation among the many guests that were at the pool that day, the situation could have been much worse if it were not for recent installation of SYNLawn’s SYNRye 211 synthetic turf product.

When the Las Vegas hotel was built, more than 13,000 square feet of a competitor’s synthetic turf made of polyethylene was installed throughout its pet and pool areas, including 5,000 square feet at the Bamboo Pool area. Over time, due to the concentrated heat from the sun being reflected off the glass that surrounded the Bamboo Pool area, the original turf began melting.

The competitor’s polyethylene turf was replaced in the spring of 2013 with SYNLawn’s SYNRye 211, made of 100 percent nylon fibers. In addition to its incredible resiliency in high-traffic areas, SYNRye 211 performed very well even against the high reflective heat of the sun. The SYNRye 211 has also received a Class A fire protection rating according to ASTM E648 testing procedures by an independent testing laboratory.

After the fire, the decorative palm trees and cabanas at the Bamboo Pool were a total loss, while SYNLawn synthetic turf simply turned black and melted without flaming up or contributing to the fire. As a result of SYNLawn’s fire resistant performance in this fire, five gaming entities on the Las Vegas Strip have asked for details and quotes on their product.

SYNLawn’s fire rated products have already received rave reviews at prestigious locations around the country including the New York Times Building, Mercedes House, The Mandarin Oriental Hotel, and the corporate offices of LinkedIn and Google.

The Las Vegas Business Press reported that, as a result of the Cosmopolitan fire, the local Clark County Department of Building and Fire Safety is looking at the possibility of modifying current building codes to include how and if decorative plastic plants and turf can be used in outside commercial environments. Many times these code changes are then incorporated throughout the U.S.

Regardless of code change, the liability is on the property owner should a fire result in the injured or worse, the death of a patron. Owners of hotels, restaurants, and other commercial establishments with large public gathering places may want to rethink their outdoor decorations and install SYNLawn’s fire-rated turf lawns before it’s too late.

SYNLawn carries a wide range of high-quality turf products, including the SYNRye 200, the only in-fill free, “fire-safe” artificial lawn product to receive the coveted E108 Class A fire rating for rooftop applications.

Design professionals can find complete product specifications for all SYNLawn products on the CADdetails website.